» Blog » The fascinating mythology of Crete 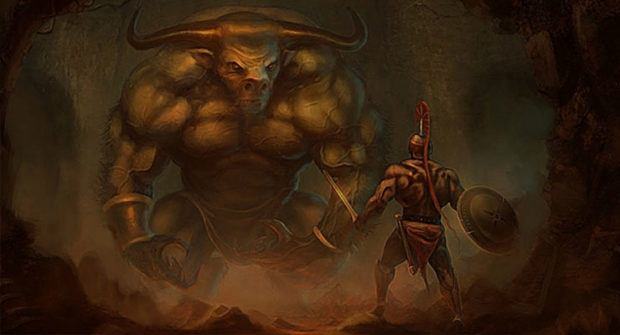 Crete was considered a mythical island since the antiquity, which is why it was related to many stories that constituted the Greek mythology. The amazing beauty and the strong aura of this legendary island created many myths about it. Did you know that Crete was said to be the birthplace of Zeus? Before spending your vacation on our island, read the captivating mythology of this special place and get ready to dive into a unique world! Read below a few of the myths that originated from Crete:

Ideon Andron: The refuge of Zeus

According to the ancient Greek mythology, Ideon Andron, a cave located 20 km from Anogeia Village in a close distance to Rethymno Town, was the place where Zeus was raised. When Zeus and his mother were hiding from Cronus, father of Zeus, who wanted to kill him, they found refuge in this cave. Archaeologists have revealed many votive offerings in that cave, from the ancient times, like shields, spears and gold figures. The legend says that a goat with the name Amalthea, raised Zeus in Ideon Andron by feeding him her milk. When Crete was attacked by a giant lizard, Zeus protected the island and threw a lightning bolt against the threat, turning the beast into a stone island called Dia.

Paximadia: The birthplace of Apollo and Artemis

Mythology says that Crete was the birthplace of the Greek god twins, Apollo and Artemis, who were born in the nearby islets of Paximadia. Apollo and Artemis were considered, along with Zeus, to be the Gods that protected Crete. A few years ago, archaeologists excavated in ancient Aptera two stunning sculptures of Apollo and Artemis that show their presence and worship in Crete.

King Minos and the Minotaur

Another Cretan myth related to the Greek mythology is that of King Minos and its palace. The ancient architect Daedalus had built the palace’s labyrinth, where the notorious creature Minotaur lived. Minotaur was the monster, which was created by the union of a bull and the wife of Minos, Pasiphae. Daedalus and his son, Icarus, kept captive there, but they managed to escape by making wings from feathers and wax. However, Icarus flew so close to the sun that the wax melted, the wings were destroyed, and he fell into the sea, near the island, which took his name, Icaria.

Theseus and the love story with Ariadne

Minotaur, from the previous myth above, was eventually concurred by the Athenian, Theseus thanks to the help of Ariadne, the daughter of King Minos. Theseus was one of the ten young men and women, who were sent from Athens every nine years to be eaten by the Minotaur. This was the compensation that Athens had to pay, because the city-state was defeated by Crete in the war. Theseus managed to not get lost in the labyrinth and killed the Minotaur thanks to Ariadne, who fell in love with the beautiful man and gave him a sword and a ball of thread to find his way out of the labyrinth.