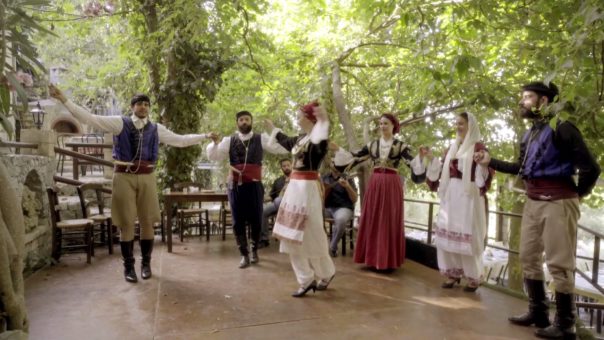 Various special elements make up the identity of each people and of each place. These characteristics are the manners and customs, the traditions and legends, any occupations of the inhabitants and of course the costumes.
Apparel is an interesting element. The climatic conditions of the island, its territorial morphology, its national adventures, and the influences that it has had on its historical course shape the costumes of Crete.

The traditional Cretan costume over time

The Cretans, after conquering the island from the Venetians, continue to wear the Byzantine garment for about two centuries.
The Byzantine “Stichario”, (long lace clothes almost to the ankles) dominates, while younger people wear cloth over the knee with a belt at waist and characteristic sock underneath. Bold and varied colors are the characteristics of these clothes at this period.
Over time, the Cretans, following the new trend or even orders, dress up according to Venetian fashion. Certainly, this is depending on the class they belong to and the profession they practice. But the same is not true for the farmers and the poor.
The trouser, called “Vraka”, made the appearance in the 17th century, and it preserved to this day. At the same time with Vraka, another trouser, the so-called “Kilota”, appeared in the early 20th century. In fact, the Kilota replaces the Vraka at that time, because of the migration of people to America and the First World War. It enters inside the boots, called “Stivania”. You can wear it with shirt, vest, a wide weave belt and a black scarf on the head.
The woman of Crete continues to wear the Byzantine garment after the occupation of the island by the Venetians and until the fall of Constantinople in 1453. This consists of two cloaks and a drum on her head. Italian fashion influenced women’s costume since the end of the 15th century. In the 17th century, the dress was split into a top part and skirt. An embroidered shirt replaced the top part. Later a decorative front apron, a remnant of the Byzantine era, complemented the costume.
Today the dancers of traditional bands wear the Cretan costume, participating in festivals and parades. Also, some older people in some villages, mostly mountainous, wear it.

The traditional men’s costume distinguishes at this with “Kilota” and the other with “Vraka”. Each of them has its own patterns, its own story and its own costume, that is, a set of individual garments.

The male costume of “Kilotas” 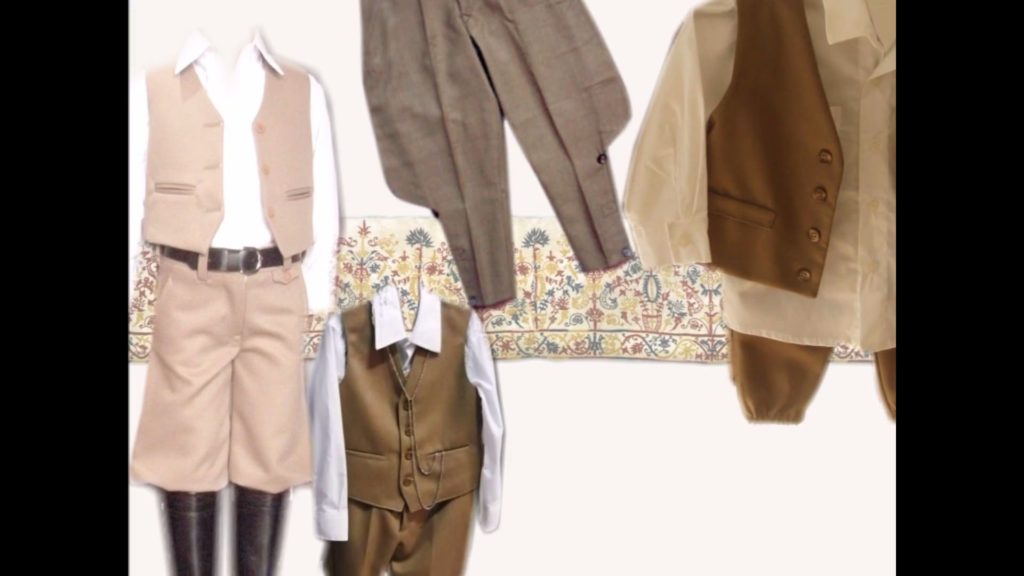 The traditional Cretan costume of the Kilota came from what the Cretans wore during the National Resistance of Crete at period 1941-44.
The costume consists of the following specific individual garments:

The male costume of “Vrakas” 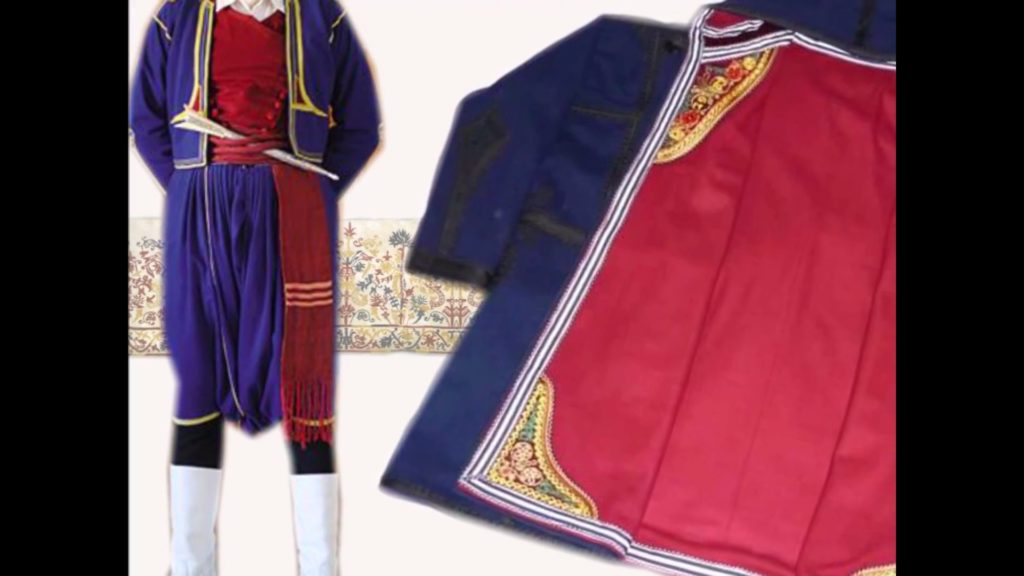 There are three typical Cretan women costumes on the island today: 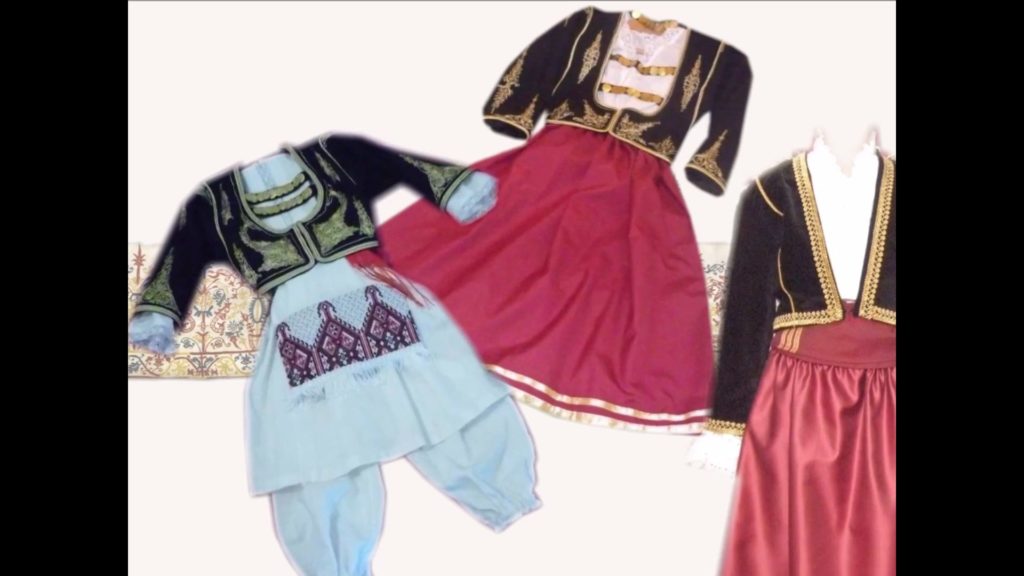 It got its name from a basic piece of uniform, which has apron-shaped and called Sartza.
The costume consists of a wide pant. Above it is a long cream-colored shirt, which has the role of a dress.
The costume apron is the classic Cretan apron with rich embroidery.
The Sartza has red color, as the weave belt has the same color.
The jerkin is made of felt in various colors, and is richly embroidered with gold. It leaves a large semicircular opening in front of it, without covers the chest.
The headscarf is red or crimson with gold or yellow fringes.

It got its name Kuda from a skirt-shaped accessory, in red color.  Kuda forms a peculiar tail-shaped decoration from the way of wearing and grasping at the back.
Includes pant with wide embroidery at trouser-legs, and long shirt.
The jerkin has the same color as the kuda, and is longer covering the hips.
The scarf of the costume is white and very long.

It is the festive or bridal costume of the Sfakia region.
It consists of a many-pleated skirt in purple or brown color usually. The bottom has a webbing of two broad golden braids.
The shirt of uniform is white woven, silk or cotton and the sleeves can have rich embroidery or lace trim.
Above the shirt comes the mid jerkin, the sleeves of which can be detachable. It is black, brown or crimson, made of felt or velvet fabric of good quality. It is gold-embroidered and has a V-shaped front opening and closes at the bottom at one point.
The scarf can be red, crimson or white.
A woven white apron decorated with rich embroidery can be added to the outfit. 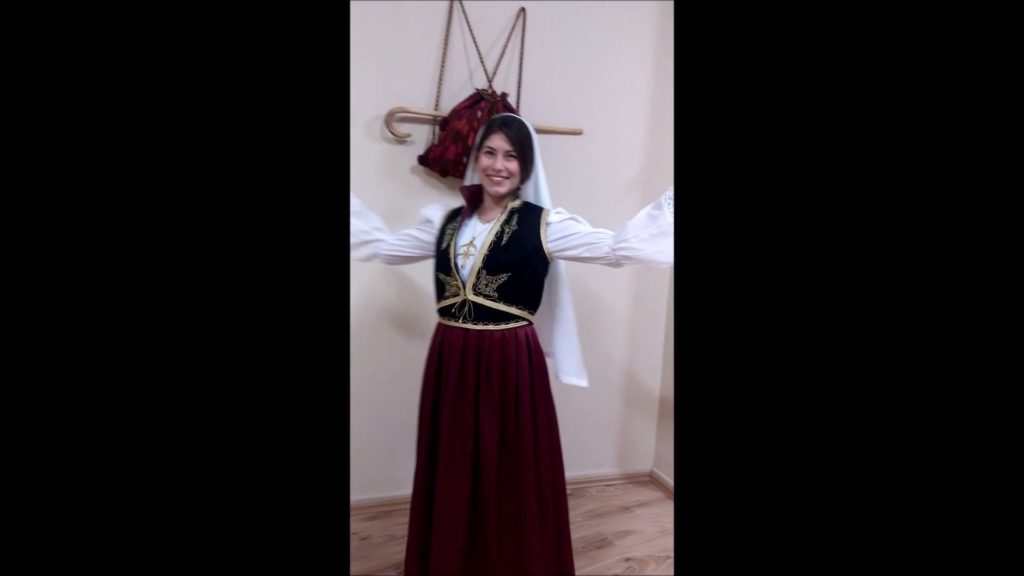 The head jewelry has separate place in women’s traditional costume, for decorative and amulet purposes.
The jewelry of the chest, neck, waist, attests to the economic and social status of the Cretan woman. She also wears bracelets, rings and coins sewn on the scarf, chest and waist.
Finally, the female knife complements the costume, which is identical to the male but smaller in size and passes through the belt.