» Blog » The history of Crete: the rise and fall of the Minoan civilisation 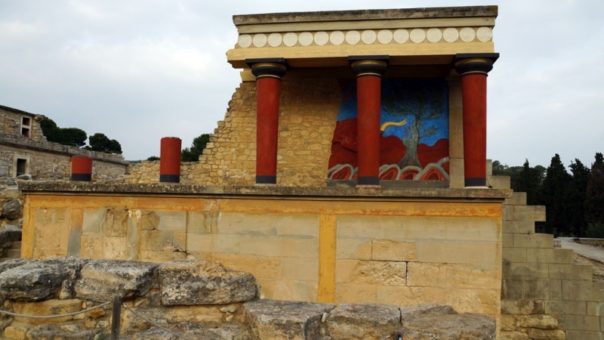 Crete has a long and rich history, and one of the best things you can do on the island is visiting the numerous archaeological sites located in the four prefectures of the island. The best-known ancient sites are Phaistos and Knossos in Heraklion, but there are also many other monuments all over Crete, such as ancient Eleftherna, Zakros and Malia. If you rent a car in Crete, you can easily and flexibly discover the fascinating history of Crete, the Minoan island with one of the oldest civilisations in the Aegean Sea.

The Minoan civilisation flourished in the Bronze Age between 2,700 and 1,600 B.C. not only in Crete but also on other Aegean islands. The name Minoan derives from the mythical king of Crete, Minos, who according to the legend has built the labyrinth with the monster Minotaur inside it. This civilisation is famous all over the world for its magnificent palaces, decorated with frescoes. The most notable palaces are Knossos and Phaistos. The Minoan cities were also well-advanced with roads, water and sewage facilities through pipes. Buildings with flat, tile roofs and walls made of stone.

The influence of the Minoans reached the whole Mediterranean Sea including the Cyclades, Egypt, Cyprus, Canaan and Anatolia. They wrote in one of the oldest scriptures in Europe, the Linear A, which has not been deciphered yet. The Disc of Phaistos is a clay tablet with signs and words of the Linear A and is exhibited in the Archaeological Museum in the town of Heraklion.

Agriculture was the main income for the Cretans. They cultivated vegetables and fruits and had advanced trade with other population around the island. They also practised polyculture, using multiple crops in the same place and providing diversity in the natural ecosystems. They followed a healthy way of life, which led to a population increase.

This economy made Minoans mercantile people for overseas trade. They had a network of trade with mainland Greece, Egypt, Mesopotamia and Syria with the predominance of female figures in authoritative roles. Therefore, historians and archaeologists believe that the matriarchy was dominant in Minoan Crete. They also worshipped the Great Goddess, the goddess of fertility.

The Minoan art includes wares with patterns of triangles, fish bones, spirals and curved lines, characterized by simplicity and few colours. The Minoans created also jewellery, such as gold necklaces, bracelets and hair ornaments, while metal vessels were produced since 2,500 B.C.

Around 1,500 B.C., one of the biggest eruptions in Europe’s history affected the Minoan civilization. The volcanic eruption in Thera, destroyed the Minoan settlement in Akrotiri, which had as a consequence the beginning of the end for the Minoan civilization. A massive tsunami devastated the coast of Crete causing significant damage that led to the economic drop. This was enough to trigger the Minoan downfall, making the island vulnerable to conquest by the Mycenaeans.